Click here to read A Glitch in the System free on your web browser through Inkitt.com. Please share with your friends!

Sanity’s Only Skin Deep, my new psychological/medical thriller novelette, is now available for free on Smashwords in mobi, epub, and PDF formats! 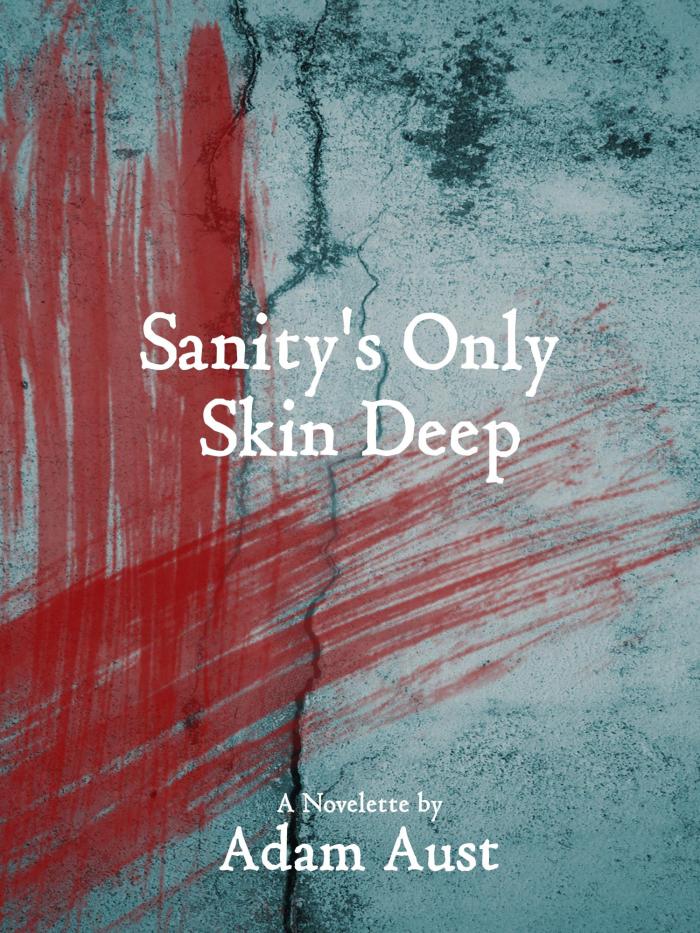 “Don’t let the science get in the way of the shot.” It’s a maxim in Hollywood, the point of which is that when making a sci-fi movie, the director should strive for emotional effect over technical accuracy when these things might conflict. Following the maxim helps to ensure that the director doesn’t lose the average viewer (and consequently a lot of $$) by making a picture that is too cerebral. For movies, when the goal is to cater to the largest possible lay audience, it makes practical and financial sense to do this.

But that’s for movies.

In sci-fi books, by contrast, authors should presume their readership is sophisticated and wants not only to be enthralled by the narrative but also to geek out on the nuances of the problem the author is posing or the world he/she has created. We sci-fi fans crave an intellectual challenge as well as an entertaining story line, and the best sci-fi books tend to present them. In fact, this is why fans of sci-fi books are often disappointed by the movie adaptations of their favorite novels–all those mouthwatering tidbits of geeky goodness that made the book so much fun are often diluted beyond recognition in the movie, a sacrifice made to ensure that the lay viewer is brought along for the ride without any issues. Sadly, the sci-fi geek’s experience suffers as a result. (Sure, there may be a scene or two that makes your jaw drop in the movie, but the overall experience almost always falls short of expectations.)

I say all the above because I feel like Blake Crouch penned Dark Matter as if it were a movie. Don’t get me wrong, his writing is great and the story definitely moves. But until the last 75-80 pages, I felt like the story was rushed to distract from the yawning, chasm-sized holes in the underlying scientific theories and in the plot. Until the end of the book, I was disappointed, even mad at times, with the lack of intellectual engagement on the obvious problems presented. Had the scientific problems been minimized to force the reader to focus on the traditional thriller issues (how do I reach my goal before I run out of time? etc.) then I would have been more understanding, and I would have given the book a much better rating. But they weren’t–they were placed front and center, illuminated with a spotlight, and then . . . sidestepped.

Let me explain with an example. At the heart of this story is the theory of the multiverse–loosely, the theory that an infinite number of universes exist in which all possibilities have occurred. The story opens with the narrator and protagonist, Jason1, a family man and physics professor at a small college, being forced at gunpoint to swap lives by and with Jason2, another version of the protagonist from elsewhere in the multiverse, who has found a way to access the other possibilities for his life by solving the paradox of Schrodinger’s cat (more on that below). Jason2 has decided that he likes Jason1’s life better than his own, and he steals Jason1’s life by force.

I am hooked at this point. The problem presented is original and awesome. I can’t wait to dig in, not only on the interesting possibilities of perpetrating crimes against oneself, but I also to learn the undoubtedly cool and complex way Jason2 accessed a different part of the multiverse–i.e., how he solved physical paradoxes that have stumped even the most ingenious scientists for over 80 years.

Continuing with the example, Jason1 wakes up disoriented in Jason2’s world where Jason2, scientific genius and the head of some covert company, had developed his groundbreaking technology and left not only the technology itself but also all his notes. Surely Jason1, a physicist himself, albeit a less accomplished one, will be able to understand the technology once he sees the device and his own notes (well, Jason2’s, but you get the point) about how he built it, right? Not so much. The reader is walked through an explanation of the Schrodinger’s cat paradox, a concrete illustration of a bizarre quantum physical phenomenon, the gist of which is that at infinitesimally small scales, some physical phenomena, such as light, appear to be both non-particle waves and particles at the same time. If you measure light as a wave, you get data that shows light as a wave. If you measure light as a particle, you get data confirming that light is a particle. Problem is, based on everything we know, this is physically impossible–things have to be either a wave or a particle but can’t be both.

The key point of the paradox is that things might exist naturally in multiple forms (hence, the multiverse) until an observer tries to ascertain what they are (i.e., tries to determine their one form). Thus, reasoned Jason2 as he started his experiments, eliminate the observer and you might be able to access multiple variations of the same thing. And if you could apply that logic to small physical phenomena, why not to bigger things . . . like people?

I’m salivating now. This is getting complex and infinitely interesting. How did Jason2 solve this? Blake Crouch must be a friggin genius to tackle something like this. There has to be some amazing answer to that question now after all this buildup, right?

Back to the example: Jason2 built a huge metal cube that he used to find Jason1’s world. A person can step inside the cube, where he/she is cut off from all outside stimuli–this eliminates the possibility of an outside observer. But even isolated inside the cube, the test subject (a person) still has his/her senses and is still therefore an observer on the inside. Thus, the cube alone doesn’t solve the observer problem. (Hmmmm, I think. How does Crouch get around that one?) Jason1 stays up nights studying Jason2’s notes, poring over every detail to figure it out, and then . . . nothing. He doesn’t understand. He finds out that another character, a neuroscientist, has developed a “compound” that affects Brodman’s area of the brain, which impacts consciousness, and somehow this drug gets the test subject over the hump.

Answer: nothing. That is it. Go in the cube, take this mysterious drug, and POOF, you suddenly don’t qualify as an observer and those pesky problems of quantum mechanics no longer apply. This pisses me off. Why drag me through a several chapter analysis of the central physical problem and then end the inquiry with complete hand waving? If you want to go that route, just minimize the scientific problem at the beginning and move on with the story. I felt duped.

As if to hammer home the absurdity of the “solution” to the scientific problem, Jason1 winds up in the cube and travelling together with another character named Amanda. You read that right, two people who aren’t allowed to be “observers,” lest multiverse travel won’t work at all, are meandering through the cube (i.e., the multiverse) side by side, talking to one another, and even using a lantern to illuminate the interior of the cube–and commenting on their observations as they go! The reader is apparently supposed to just ignore all that, even after being walked through the details of the underlying paradox and being taught that observation is they key blocker to multiverse travel. Don’t worry about all that, we are prodded, they are on the wonder drug so they can’t possibly be observers any more.

The story wasn’t all for naught, though. My anger at the above and my frustration at having to repeatedly read about Jason and Amanda opening the cube and walking into somewhat cliche sci-fi worlds (post-nuclear, dystopian Chicago; a frozen, snow-choked forest in which people are dying of starvation; futuristic Chicago with crystalline skyscrapers and super-fast trains) was finally mitigated when Jason1 made it back to his world (just as he was about to run out of the magic drug, and against all odds, I might add–that made me mad, too). I was primed to have this be a “and they all lived happily ever after” ending and to give this book a 1- or 2-star rating.

But when he finally gets back, things actually get interesting. Because of the infinite nature of the multiverse, many Jasons made it back to this world and they are all trying to figure out how to win back to their wife and kid. Theoretically, they all have equal rights to her, and theoretically they all have the same intellect and capacity. That made for some interesting game theory possibilities, and Crouch executed those brilliantly.

If this book were a novella that focused on the last 80 pages and condensed the first 275 pages into 20 or so, this would have been a 5-star masterpiece. But because I was forced to walk through a thicket of B.S. and cliches to get to that point, 3 stars is the best I can give Dark Matter.

This book was disappointing. The opening chapters seemed to be setting up a Crichton-esque adventure-thriller, but then the narrative went on to flatline for extended periods over the next 200-300 pages. It felt like the authors were overly eager to share their research, and they used the story as a vehicle to accomplish that, instead of using their research to flesh out a compelling narrative. Too much emphasis on archaeological and cultural obscurities, with too little focus on tempo and plot. Two stars.

In an oddly perfect marriage, The Gunslinger, the first book in Stephen King’s Dark Tower series, is The Good, the Bad, and the Ugly meets Lord of the Rings. Only King could pull this off. I highly recommend this unique and engaging story, and I will definitely read the second book in the Dark Tower series. My only beef was with the writing, which feels strange to say about a Stephen King work. At times it felt like he was trying too hard to make the story sound like an epic fantasy, instead of just letting it flow. Not a major issue, though. The pros far outweighed the cons in this book. Go grab your copy today!

Stephenson is to hard sci-fi as Tolkien is to fantasy. The world he creates in Seveneves is incredibly real, with no detail offered frivolously. It takes a particular sort of genius to dream up and then solve the scientific challenges presented in this book. The only reason I give Seveneves four stars instead of five is that Stephenson rambled too much in the middle of the book, creating (in my humble opinion) unnecessary lulls. There were spots where the writing was a little bit confusing, too. But neither issue would deter me from recommending this book wholeheartedly to others.

Thanks to smashwords.com, A Glitch in the System is now available via iBooks, Barnes & Noble, kobo.com, inktera.com, scribd.com, and others, and, for a limited time only, you can download the book FREE! So get to your favorite online bookstore and download your copy today.

Good news for everyone who entered but didn’t win my Twitter, Goodreads, and Amazon giveaways for A Glitch in the System: for a limited time, the ebook is available FOR FREE on smashwords.com! Click here to download your copy.

To celebrate the coming of 2017, I’ve decided to spread some thrilling, murderous cheer by running giveaways for A Glitch in the System. Enter here to win a free Kindle version of the book from Amazon (live now), or here to win a paperback copy from Goodreads (live January 4th). If you’re really ambitious, you can enter a third giveaway by retweeting the pinned tweet on my Twitter homepage. Good luck, and Happy New Year!